–>> Hey, it’s Tokk. Cross-reporting and posting on this extremely early  in the morning and i’m exhausted. O’ well.

Sure all the forums T-drome , Mikeys , ect. are all abuz of talk and squabble.

Not that you haven’t seen it, but posted here for prosperity. Hope Steph doesn’t mind.

So, about that meeting I mentioned a few days ago… here are the “two dudes” Gary and I met with… That’s Scott Mednick on the left and Galen Walker on the right. Galen, you may remember, produced the 2007 “TMNT” movie. Scott is also a movie producer with impressive credentials. Both of them will be — well, why don’t we let the official press release tell the story:

Los Angeles, April 23, 2009— The Mirage Group has given the green light for development of a live-action major motion picture focusing on the origins of the iconic Teenage Mutant Ninja Turtles, targeted for release in 2011.

Announcement of the latest (fifth) big screen version of the crime-fighting “heroes in a half-shell” comes on the day the Turtles kick off their 25th anniversary national “Shell-ebration” in New York City with multiple events that include the honor of lighting the Empire State Building in ‘turtle green’ and a unique outdoor presentation of their beloved first “Teenage Mutant Ninja Turtles” film at the Tribeca Film Festival “Drive-In”.

Mirage is partnering with producers Scott Mednick (“300”, “Superman Returns”, “10,000 BC”, and the upcoming “Where the Wild Things Are”) and Galen Walker (who produced the most recent computer-animated “TMNT” theatrical release) to create this live action film. Peter Laird, Gary Richardson, Frederick Fierst, Eric Crown and Napoleon Smith III will serve as executive producers of the film, which is based on the Teenage Mutant Ninja Turtles characters created by Laird and Kevin Eastman. Mednick and Walker will serve as producers. The project is being funded through Lightbox Productions, LLC.

“It was critical to us to find people who both understood the Turtles franchise and were accomplished film makers who appreciated both the action and humor components of the Turtles’ identity ,” said Gary Richardson CEO, The Mirage Group. “With Galen and Scott we know we’ve found great talent with those essential attributes.”

“The original dozen comics created by Peter Laird and Kevin Eastman are some of the best source material one could hope for,” said Mednick. “We’re excited to bring this story to a whole new generation of moviegoers as well as the legions of fans that have made the Turtles – Leonardo, Michelangelo, Donatello, and Raphael as well as Splinter, April O’Neil, Casey Jones and, of course, the great villain Shredder – a part of their world for 25 years.”

Mednick has begun reaching out to writers and directors and is already in discussion with several high-profile actors interested in portraying Turtles characters they loved as kids.

4Kids Entertainment, master licensing agency for the Teenage Mutant Ninja Turtles property, will be handling all of the movie merchandise licensing.

The Teenage Mutant Ninja Turtles made their public premiere in May 1984 in a comic book published and distributed by Mirage Studios. A hugely successful TV series quickly followed, along with a record-setting licensing program and three successful live-action theatrical films. In 2003, the Turtles were re-introduced to a new generation through a fresh TV series, a computer- animated theatrical movie and new merchandising program. The 25th year of TMNT will provide fans of all ages with the opportunity to experience this evergreen property in a ten-city mobile tour highlighted by the TMNT Party Bus, a rolling museum of TMNT memorabilia.

Additional information is available on the http://www.tmnt25.com and http://www.4kids.tv websites.

About Mirage Studios
Mirage Studios, Inc. is part of The Mirage Group, a group of companies located in Northampton, Massachusetts that owns, manages, nurtures and protects the Teenage Mutant Ninja Turtles property.”

Woo hoo! So here we go — another live action film! As you may recall from some of my previous comments, our initial discussions regarding the next film had to do with what we were calling a “hybrid” — live action with realistic Turtles rendered in CGI and blended in. This new idea — which, frankly, I am VERY pumped about — will have actors and stunt performers in full Turtle suits for filming in live action. As of right now, there is talk of using CGI to do “face replacement” for the suits so that we can get those great, expressive faces possible with CGI.

We are very early in the development process — no writer or director has been chosen yet. And we’ve just started talking about the story. But I’m really looking forward to getting into it! — PL

P.S. Here’s a photo of Galen holding an artifact from the first live action movie (the head from the Donatello stunt costume) in my office at Mirage Studios a couple of days ago. 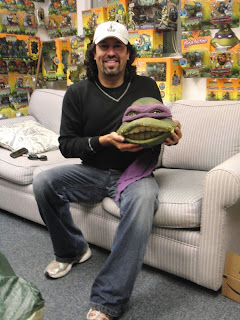