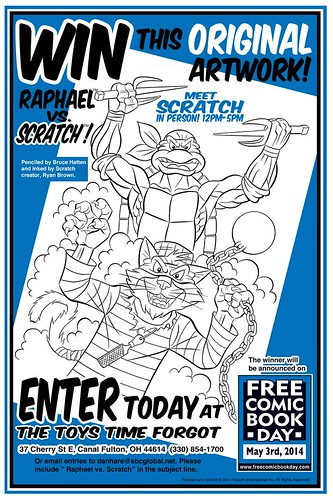 EMAIL danhare@sbcglobal.net to enter; “Raphael vs. Scratch Contest Entry” in the subject line of your entry.

“Win this original artwork! Penciled by Bruce Hatten and inked by Scratch creator, Ryan Brown. Entries will be accepted between now and Noon EST May 3rd, 2014. Entries must include your name, current address, phone number and e-mail address.

Entries should be e-mailed to: danhare@sbcglobal.net

Please include “ Raphael vs. Scratch Contest Entry ” in the subject line. You may also mail your name, address and phone number on a postcard to: Raphael vs. Scratch Contest Entry 137 Cherry St E, Canal Fulton, OH 44614 Remember your entry must arrive before Noon EST May 3rd, 2014 to be eligible for the drawing so don’t delay! The winner will be chosen in a random drawing and announced on May 3rd, 2014 Second prize is an autographed limited edition print with certificate of authenticity. Good luck everyone! –>> Tokka still retains that the TMNT mythoes have been helped shaped in retrospect of a very short period of time by legendary artists and story tellers. ‘Coarse Turtles fans already knew this, but those outside of the know had given Tokk allot of guff about it since he was a kid.

Thanks to a tip from X –  “LEGENDARY” in all sincere senses of the word inspiring fine/pop-artist, animator, character designer, and comic book illustrator and cartoonist Milton Knight and his classy; 1-of – a kind ‘Terry Toons’ on crack style is brought back into this Snapper’s spotlights.

If you aren’t quickly recalling his excellent n’ wacky contributions to the “TMNT ADVENTURES” Specials ( Remember Extra Dimensional Farmer Louie and his famous  floating-farm, Oxy Moron, Kid Cortex, the villainous swine monster Sooey Generis, and a particular Baby Cleaver who had a really bad sinus problem and used to sneeze out demons and all sortsa crazy critters – it was up to the Green Teens to save him from some twisted Clansmen !! !! )  !!

All over the map, Milton has crossed artistic Pop-paths from the famous to the most imfamous.  Character and animation designs on the cult film “Cool Wold”, Felix  the Cat, The Adventures of Sonic the Hedgehog , Heavy Metal Magazine, Work in the publications of Fantagraphics & Nickelodeon Magazines, Gallery artist and educator. This doesn’t even “SCRATCH” the surface.

When exploring **Milton’s site ( being aware of some of his more risque Adult art that may not be suitable for the younger set ) you will encounter Milton’s final TMNTA story contribution.

“Here’s the last Teenage Mutant Ninja Turtles story I did (with a little credited help from my friends). It remains unpublished because Archie Comics halted the series soon after it was finished. From 1993 (concurrent with my Adventures of Sonic the Hedgehog work).”

CONEY ISLAND DAYS! marks the return of Hallocat ( better known as  “Scratch “ and his frightening Mutant-Monster pals Nocturno the Owl and Nevermore the Scarecrow. The Uncanny Trio’s ‘Blows the Turtles Minds’ literally and two somewhat “Honey Mooner – ish” Brooklynites adopt the 4 teens temporarily for a Wrestling exhibition of a much different kind than the Turtles had encountered before. And one that’s more local as they become an attraction at N.Y.’s  famous Coney Island !! The insane tale also seals the final fate ( ? ) of the Uncanny Trio as the Turtles Rock  the Fun House !!

So in case you hadn’t seen this – –>> Hey !! Let’s check out the differences and variations on the classic TMNT Party Wagon & the recent TMNT 25 Reissue !! ** But there is an important note from Dan & Ryan regarding orders of this special edition print .. ** :: “Orders are no longer being taken. Since we want to get the shirts out to everyone ASAP, if payment hasn’t cleared by September 8, the order will be canceled – we apologize if something goes haywire with your payment, but to be fair to everyone, we gotta do this. Thank you very much for the support, we really appreciate it!”