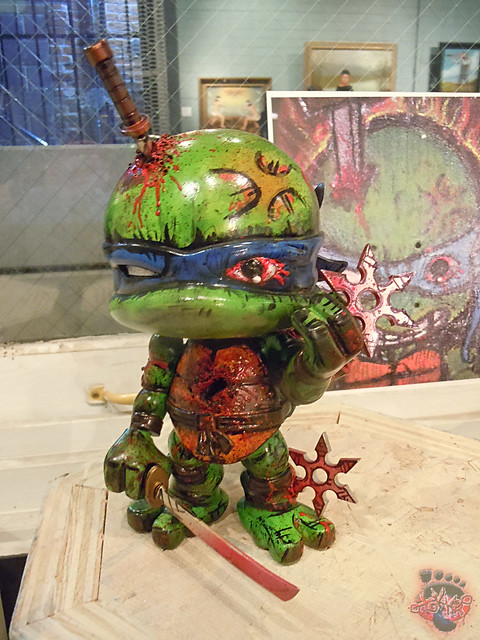 –>> Original & basic, limited edition 8″ JUMBO LEO vinyl figure from Nickelodeon’s booth at SDCC 2015. A SCALED-UP version of the original 3″ vinyl LEO. This particular design is based off the skateboard painting Tokka did in turn based off Joe Allard’s illustrative design for the vinyl character itself. 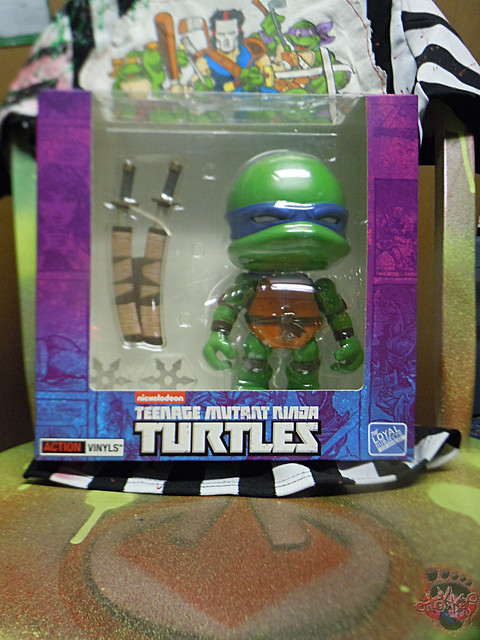 The broken deck piece was also given to Allard as a gift in California in July 2015 in regards and honor to all his stellar hard-work for Loyal Subjects. 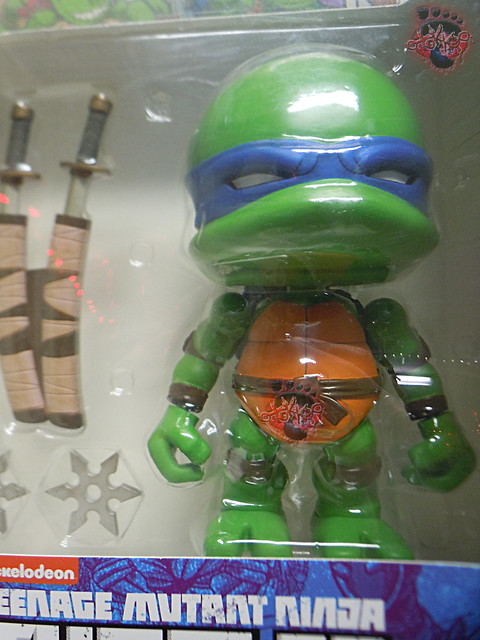 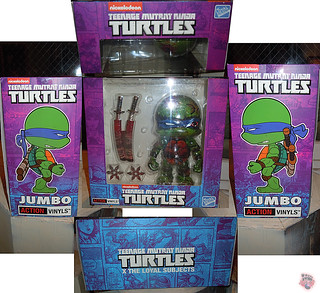 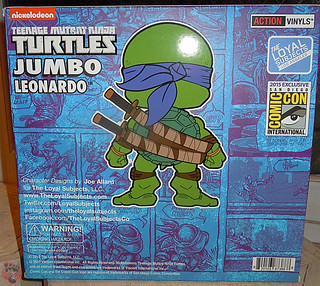 All decor on the jumbo fig exaggerates the original deck image even more. The katanas are able to enter Leo’s frontal lobe with relative ease. Also an abdomen “seppuku” wound allows for the inserten and extration of the swords. 4 Ninja-Star “Shuriken  open-wounds” allow for the stars to be inserted and removed into the back of his noggin. left ankle, right arm, and the upper-back of his shell -just above his scabbard. 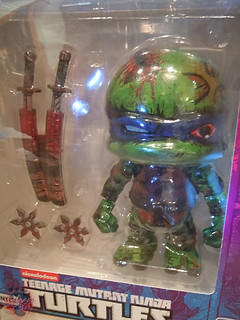 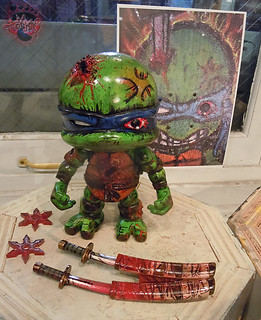 The hole in the back of the shell for the scabbard has been “roughened-up” to add a little more restraint so that the piece doesn’t fall out as easily. ~ t 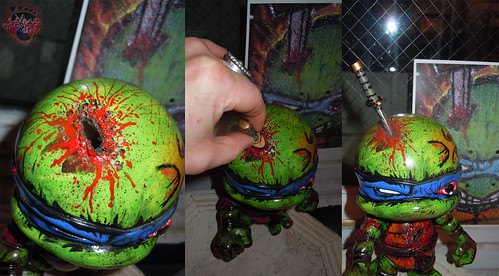 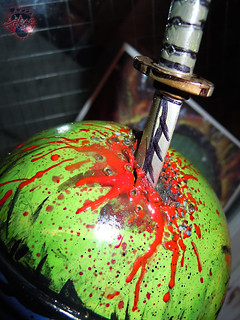 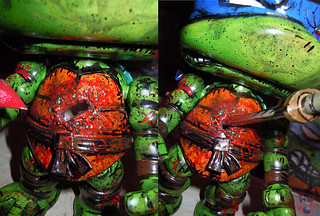 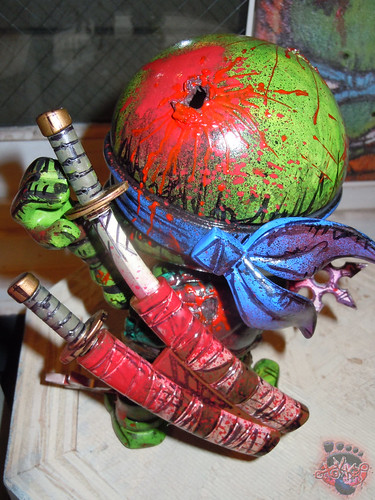 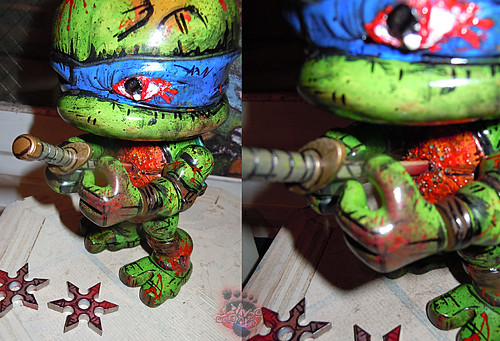 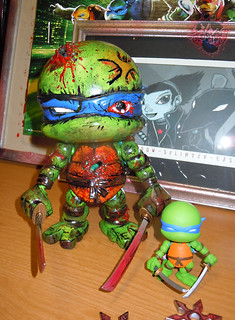 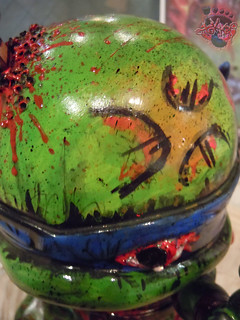 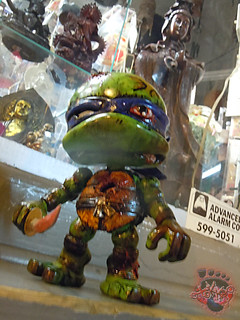 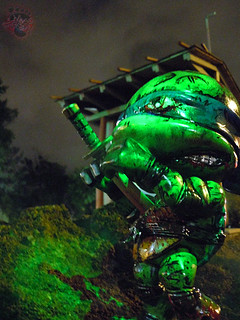 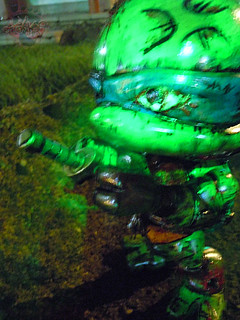 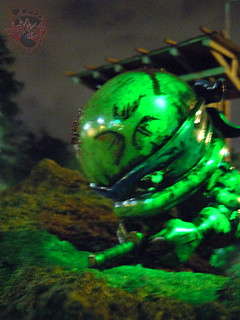 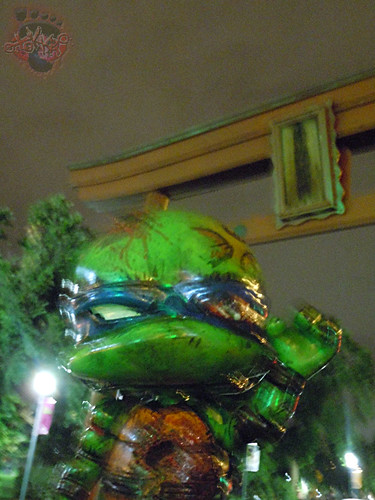 GEEK TYRANT :: “TMNT: VETRANS OF THE NIGHT”; the acclaimed ‘older Turtles’ Turtles fan film is getting much praise, including kudos from Kevin Eastman himself.

“Take a Turtle-y awesome trip back to the Time of Dinosaurs with Half-Shell Heroes: Blast to the Past! Join Leo, Donnie, Raph, and Mikey as they make new dino-sized allies, battle aliens from the future trying to rule the galaxy, save the day, and get back home! Dinobunga!”

The Triceratons have destroyed present day Earth! Help the Teenage Mutant Ninja Turtles travel back in time, battle alien space creatures from beyond the known Universe and save Earth in this furiously-fast puzzle fighter game for iPhone, iPad, and iPod touch!