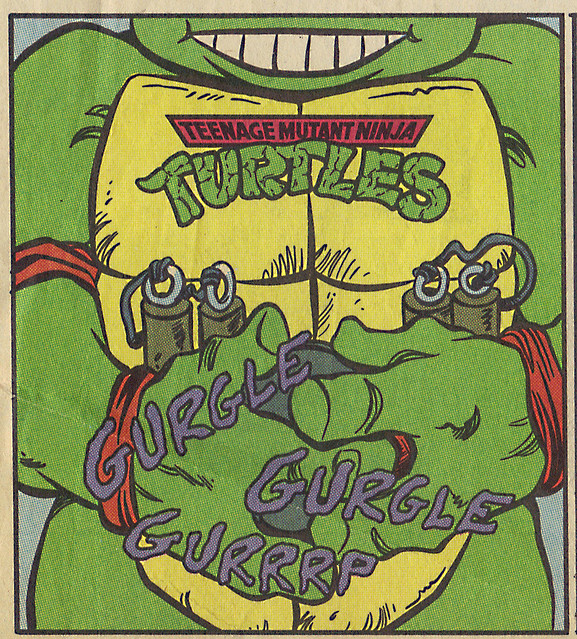 Related notes for this month ::

And the Paramount movie sequel is still steam rollin’ ahead with some major surprises, in case ya missed em’  :: Today I present to you a review of our upcoming issue of Tales of the TMNT, #60 “Nobody Does it Better”

The first thing I gratefully mention is the Recap at the start of the issue. This was a big reminder of how tightly intertwined the people and events are throughout the Mirage comic’s universe – Whether the events happened fourteen issues ago or fourteen years ago. The Frontispiece, by Michael Dooney, gives us a few questions to ponder about existence and one’s purpose in life. Very nicely done, writing-wise and artistically.

As always, if you want to avoid anything spoiling in nature, just skip the next four paragraphs.

Our story opens in the early hours of morning, going back and forth between a government bunker in Nevada and the rooftop of a pizzaria in New York City.

In Nevada, The military is checking in on an old alien ambassador after a fourteen year coma. The alien is awakening, and top brass is preparing for  any possible threat. Things get chaotic, and something get shot out of the alien and into the atmosphere.

With Raphael and Casey, only a few days have past since April’s departure for some seriously needed soul searching. Casey is trying to drown his sorrows away, leaving Raph to put up with his rapidly deteriorating temper.

Nobody appears, much to their surprise. It turns out he was the projectile shot out of the Alien. Armed with new abilities, he also has a new purpose – to protect the ambassador at all costs. The guys end up getting a taste of what Nobody’s new life will involve, and the issue ends with them parting ways. For now.

In all, I did enjoy reading this issue. Given the amount of background information needed to understand the story, this would seem more appropriate as a regular TMNT issue. For a regular joe to pick this comic up in a store and glance through it, there’s a lot to swallow in one sitting.

With this new situation of the Alien Ambassador and the new alien threat, we’re bound to see Nobody again in the near future. Nobody’s character is an interesting one. As a simple disguised cop-turned-vigilante, he probably could never have predicted his new purpose in life being that of a protector of an intergalactic diplomat. Who could really look at their life now and say for certain what it would be in ten, twenty years?

As for the Artwork… While I’ve always been a fan of B&W, this issue proved to be a bit difficult to understand some pictures. I think it would actually be easier to comprehend if it was colored, like the cover. Which, oddly enough, has Raph shown as a normal turtle. Why this is, I do not know.

As always, Jim’s use of texture and lighting help to bring an image off the page, whether it’s a sandblown army hummer or the scaly, dinosaurid body of Raphael. Raphael’s current state is one of the things I really enjoyed about the issue. I don’t see TMNT as much as I should, but this look of Raph’s reminds me of Jim’s Paleo: Tales of the Cretaceous comic. If you get a chance, be sure to check out Jim Lawson’s blog. He’s always posting great artwork, both TMNT and Non-TMNT – He’s in our list of links, stop in and say hi…

Overall, it’s a three out of five stars. Not a bad read at all…