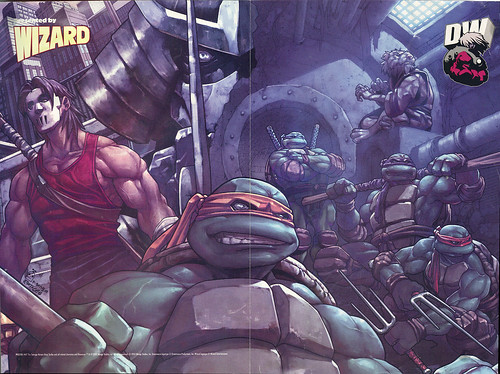 –>> Two ill-fated publishing house markings linger on this mini poster version of one of the more “STAND-OUT” variant covers of DW’s short lived TMNT animated #1 book. Peter David and Lesean Thomas’s first book boasted at least a couple variants. This Lee illustrated / Sunga coloured piece also made it onto a print offered by comic shops luckily sans all the logos.
At the moment i cannot recall where else this image may have been printed aside from the variant cover. . However it has been one of the more popular wrap-arounds in the fandom for over a decade now. Hmm – I do have a comic-shop exclusive Print of this piece sans the logos i will have to locate.

Tokka cannot offer the best critique of these things, but off the cuff: Lee’s “Muscular” style; love it or hate it renders Splinter, Casey and the Teens really well.

Shredder’s ominous presence in the background is perfectly balanced on the fold-out, even a little creepy with the one striking pupil focused on the viewer behind a classic clenched fist like pose. Half the bladed gauntlet obscured showing in front of Saki’s/Ch’Rell’s masked face and Ramil’s digital, painterly “POP-OUT” colours are two of my favourite items in the piece. Interestingly Michelangelo kind of takes the lead on the cover in kind of a smirky but mighty pose. The NYC cityscape in the background looks more familiar in that old DW styling.

This may be one of coolest covers from that era. Defiantly one of the most memorable.
The Wizard and DW logos bothered the hell out of me tho’ on this particular format. But that’s how it goes with these posters books Wizard put out. The 40+ poster fold-out magazines were printed with the images back to back. If you had a favourite character / artist’s poster who you wanted to tack up on the wall and on the back of that poster was an equally fave Comic book character and artist you’d run into problems. Just short of buying a whole other “PosterMania! ” issue of the same book.

Again the books’ images were meant to be utilized and hung up to promote the years’ upcoming titles. You did have to lift the staples out of the center of the mag to remove all the posters, let alone one that had your favourite character on it buried under the other pages.. That was always was bloody murder on my finger-tips and nails just short of using a butter knife or stapler-remover

It appears in some cases, these books & the 2003 PM! book can be kind of pricey and hard to come by.

Related notes ::  The Mystic TURTLES from last weeks’ popular T.V. episode are magically and slowly showing up on pegs ( shown here are pix from a Walmart ).

The first real basic toy offerings for 2015 show us previews of figs you got to peek at last year like Dire & Dark Dream Beaver, Baxter Fly, and Mike as Tur-Flytle. But fresh sneak-peeks on characters new for season three including Napoleon Bonafrog, the first EVER Attila the Frog, and the New but NEUVO – CLASSIC styled MUCKMAN. New TMNT Collection pack-in Pamphlet caps provided by Instagram user TMNTLEATHERHEAD. 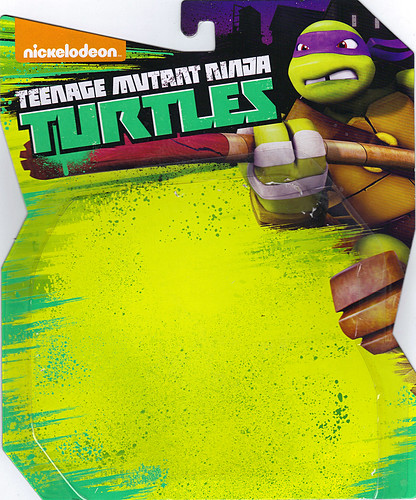 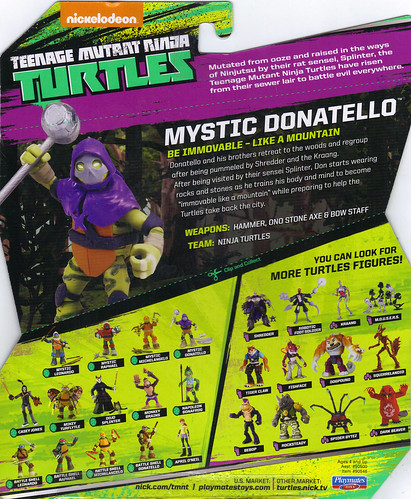 ..while not entirely unique like the classic PLAYMATES TMNT cards .. 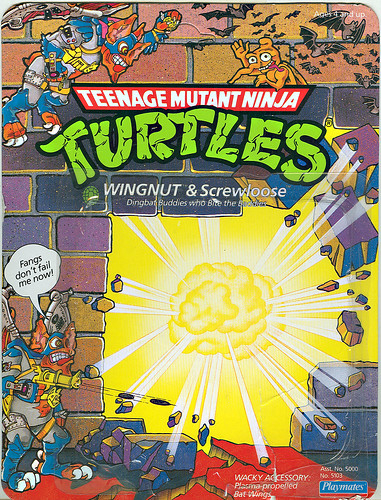 – – the UNIFIED PACKAGING takes a slight cue from the 2005 – 2006 card backs giving the Teens themselves more personalized packaging for specific Turtles. But also freshens up the secondary characters, villains and supporting cast cards for the new year. 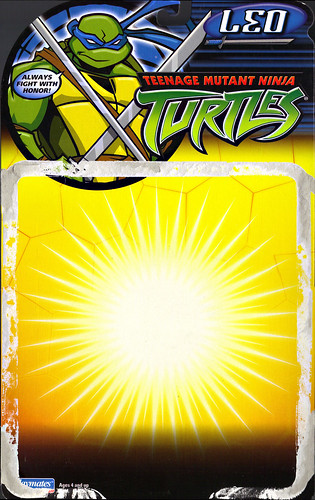 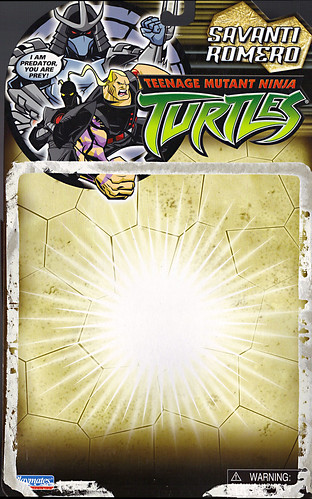 ..and this old thing.

I’ve just got back from the UK Toy Fair, and spent most of my time on the Flair stand, drooling over all the TMNT stuff…

There wasn’t nearly as much as last year (makes sense, since last year the focus was on the movie), and most of what was shown was either old, or non-figure related. Also, none of the people I spoke to were particularly knowledgeable about TMNT.

Everything shown has already been released, apart from Wave 3 2015 (Due October in the UK, no doubt much earlier in the USA):

Head Droppin’ Turtles – yeah, they’re doing these in the smaller scale. Pretty crappy, the gimmick didn’t work all that well and the paint apps are reduced even further (the ankle & wrist wraps weren’t even painted). All 4 brothers are due, although Raph was missing for some reason…

Monkey Brains – I think we saw a pic of him at SDCC, the figure’s nice and big but has a very simple sculpt & paintjob. The figure I saw was a proto, I’m told the final figure will have some kind of action feature.

Dream Beaver – Fairly basic, barely articulated red beaver dude. Again, the paint apps have been cut – he’s didn’t even have the design on his stomach!

Attilla the Frog – Looked like a happy meal toy. Articulated at the shoulders only, he’s hollow to accommodate his action feature – flip a lever on his back, and his tongue sticks out.

Shredder Clones (?) – No one knew much about these, apparently they’ll come as a 2-pack. One was normal size, orange with lobster claws, the other was a smaller unarticulated neon pink dude with some kind of tendrils/tentacles coming off him. Both had metallic blue armour.

Mutations – there’s a new line of Mutation figures where each Turtle turns into his signature weapon. Neither turtle nor weapon mode looked very good (unless you’re into half-arsed mecha turtles). I got to play around with Mikey, and he was very tricky to convert, and his weapon mode is basically 2 10″ sticks that are a bit floppy in the middle. Only Leo & Mike were on display, but all 4 will be made.

T-Machines – think TMNT Hot Wheels. Cars featuring the main cast (each car comes single-packed or in multipacks, and each has multiple colour schemes). There’s also a range of playsets, a sewer lair, streettop and Shredder attack. Admittedly, these looked quite fun.

Giant Leo Playset – this was by far the coolest thing I saw at TF. It’s a massive, 2′ tall articulated Leo figure that folds out into a massive playset, with several different areas. It’s not as tall as the Sewer Lair, but its footprint is about 4 times bigger. It’s scaled to the regular figures.

I’ll get some pictures of the catalogue up tomorrow, but there’s not a lot in there that we haven’t already seen.