While that cyber deal is over, looking back online for more deals for Hannukah and the rest of the holiday season on the Lionsgate Super release i have found 3 decent deals on the set well under the SRP of about 99 bucks. ::

I’ll let everyone know if i fond more deals on this much wanted set in case fans out there are still struggling to get it a decent price ( ****or let me know if you find a better price point to help your fellow fans out !! -tOkKAb2@terrible2z.com ) .

BUYER BEWARE :: Look, this release is awesome..but KNOW WHAT YOU ARE GETTING HERE !!

This is a great set if you’ve never purchased an official release hardcopy of the classic series, getting this as a gift for a fan, or if you are a hardcore fan and loving the cleaver Turtle Van packaging !!

But what this really is IS a fancy repackaging of every single TMNT Original Series DVD that has come out from 2004 – 2012.

So if, like many fans i know ..you have purchased each LIONSGATE release religiously since 2004 and can do WITHOUT the fancy packaging .. you actually ALREADY HAVE THIS ENTIRE SET !!

Also unfortunately the ***Teenage Mutant Ninja Turtles: Legend of the Supermutants OVA anime ( part of the original TMNT show continuity ) is not included in this set . Like it or not : This week’s Shout Factory release of ** Ninja Turtles: The Next Mutation, Vol.2 DOES INCLUDE the famous / infamous Rangers/TMNT 2-parter Power Rangers in Space: Shell Shocked !! Thus giving us the complete adventures of the NEXT MUTATION for the first time in an official North American Release. They’re LEANER … They’re GREENER…
and this time, they’ve got COMPANY!

From the darkened sewers of New York to the mysterious splendor of China and beyond our world to the spiritual Realm of Dreams…shell-ebrate the return of Leonardo, Raphael, Michaelangelo and Donatello with “Ninja Turtles: The Next Mutation”!

The most radical superheroes on the planet are now full-grown Ninjas, and in this brand new live-action adventure, “East Meets West,” they discover a new enemy, the Nefarious Dragon Lord – and a new freind, Venus de Milo, a female Mutant Turtle!

Like her Ninja counterparts, Venus fell into the same toxic ooze at birth, but was raised in Shanghai as a Shinobi mystic. and unlike the boys, who were raised in the way of body and might, Venus’ greatest weapons are the powers of the mind and heart!

Together, the Turtles must outsmart and defeat the Dragon Lord and his warriors before they carry out their evil plans to achieve total invincibility and conquer the universe! 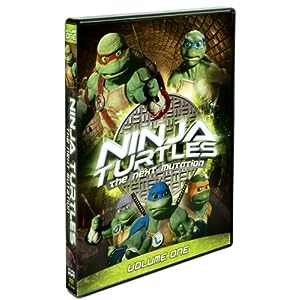 Shout! Factory sets a release date for, the first volume of Next Mutation for September 4th, 2012. It is not know at this time if the episodes will be uncut/unedited. However given how much love and care Shout puts into their releases, I am willing to bet they will do everything within their power to make sure they are.

Update: Straight from Brian Ward of Shout! Factory’s Twitter Account: My Question: Will the episodes be uncut/unedited unlike the UK release by Jetix?

Brian’s Answer: Was never under the impression that what I had WASN’T complete. –>> Meant to post this last week  so let’s get down with the nitty-gritty,